On “getting a grip” on Sex 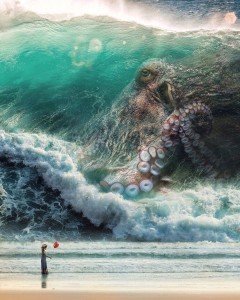 Within a few days of witnessing mutliple gangbangs, my little adventure-junky bubble popped, and I realised that in the quest of feeling like I had some kind of grip on or sense of “getting it”, I had managed to dive straight into the peak of soullessness that sex could be reduced to.

What if there is no “getting a grip” on sex? We are so desperate to feel like we have a handle on it and that we can control it somehow – whether within us, by stifling or suppressing or coercing it, or outside of us by sterilising and regulating, exploiting and packaging and commercialising it.

All the time forgetting that it’s like trying to control the wildness of the ocean.

What if the path to sexual liberation is the opposite of having a grip in it?

What if it is about admitting how tiny and overwhelmed we feel in the presence of it and yet finding ways to lean into and be intimate with it? What if it requires us to acknowledge our fear of the sheer intensity of emotions and feelings and desires that sex so powerfully catalyses? What if it is about embracing the clumsiness, nakedness, weirdness and shame? What if it was about allowing ourselves to become increasingly sensitive to it ALL – the pleasure and the excruciating vulnerability – rather than inure ourselves on the quest of staying comfortable?.